Is It Safe For Me To Use The Airport’s Public Wi-Fi When I Travel? Most airports around the U.S. and abroad provide free Wi-Fi service to travelers stranded in their terminals, waiting for their flights. While this service may appear to be generous, a recent study by Coronet, a cybersecurity company, suggests you might want […]

Is It Safe For Me To Use The Airport’s Public Wi-Fi When I Travel? 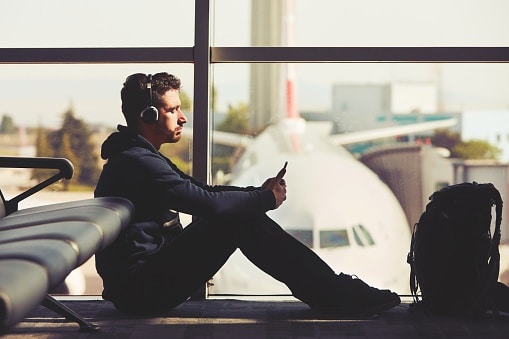 Most airports around the U.S. and abroad provide free Wi-Fi service to travelers stranded in their terminals, waiting for their flights. While this service may appear to be generous, a recent study by Coronet, a cybersecurity company, suggests you might want to think twice before connecting to the airport’s Wi-Fi.

According to Coronet’s findings, most airport public networks are unencrypted, insecure, or improperly configured. Hackers, therefore, have easy access to devices connected to the networks and they can potentially steal your personal data.

What Can Hackers Take?

Most public connections are either unsecured or require shared passwords. Hackers want to get between you and the websites you visit in order to look at your information. They do this with little effort on public Wi-Fi networks.

A weak network makes it easy for a hacker to gain access credentials to cloud apps, such as Microsoft Office 365, G-Suite, Dropbox, and iCloud. They can send malware to your device and the cloud, as well as breach your various forms of infrastructures. Although it’s not horribly difficult to cancel and replace credit cards and void unauthorized transactions, once passwords and business digital frames are exploited, it’s incredibly challenging to recuperate complete control over them.

How Were These Findings Conducted?

Coronet revealed which airports have the most vulnerable networks. They came up with a ranking system of airports by their threat level. Coronet amassed data from more than 250,000 consumer and corporate endpoints over a 5-month period that went through the 45 busiest US airports. They gave each of the airports a threat index score after assessing the vulnerability of the traveler’s devices who used the airport’s network.

“Far too many U.S. airports have sacrificed the security of their Wi-Fi networks for consumer convenience. As a result, business travelers, in particular, put not just their devices, but their company’s entire digital infrastructure at risk every time they connect to Wi-Fi that is unencrypted, unsecured, or improperly configured. Until such time when airports take responsibility and improve their cybersecurity posture, the accountability is on each individual flyer to be aware of the risks and take the appropriate steps to minimize the danger.” – Dror Liwer, Coronet’s founder and CISO

How Did The Hackers Specifically Get Traveler’s Information?

In its report, Coronet revealed some specific ways in which hackers were able to infiltrate the airport’s network and steal people’s information. In the worst rated airport, the data revealed that hackers in San Diego set up an “Evil Twin” hotspot with the name “#SANfreewifi” at the airport to trick users into connecting to it. This allowed them to have access to all of the files that the victims downloaded or uploaded while they were connected. Similarly, at Houston’s William P. Hobby Airport, which was rated third weakest, hackers created a network named “SouthwestWiFi.”

How Do I Prevent Hackers from Attacking Me?

You don’t have to stop using public Wi-Fi for the rest of your life, and it’s not exclusively the airport’s fault. Let’s look at an easy solution to protect you from the majority of hackers.

You have the ability to turn on two-factor authentication for all your web services. How this works is when you try to login to a website, the website will text message your phone with a code that you’ll enter into the site in addition to your password.

A VPN (virtual private network) is a secure and private solution within the wider internet itself that allows you to send and receive data while maintaining the secrecy of a private network.

If you access your data remotely via a VPN connection when you use public Wi-Fi, it can protect data from interception and networks from compromise.

Most importantly, remember to always be alert and use caution when browsing the internet. In your browser, block cookies and remove tracking. Avoid unsafe or untrusted software recommendations. And lastly, avoid suspicious links in your inbox or on your social media feeds.