Dental IT Services From The Nation’s Top Dental Tech Firm

NOVA Computer Solutions is a top-rated Dental technology and Dental IT services company serving dentists throughout the country.

Dental IT Services From The Nation’s Top Dental Tech Firm 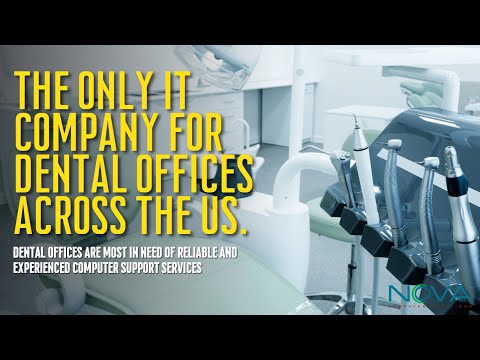 How Did The CEO of NOVA Computer Solutions Get Started?

Dan De Steno began his career in the Air Force, working for the Defense Intelligence Agency (DIA). Along with a handful of technicians, his duties were managing the DIA servers. During that time, Dan’s wife was employed by a local dentist who struggled with technology.

It was brought to Dan’s attention that the dentist was having issues with their IT. He quickly stepped in and resolved the problems with his background in managing Air Force servers. That led Dan to help another dentist. What fascinated him most was the dental technology he saw.

With his reenlistment coming up and notified he was being transferred overseas but wanting to stay and start a family locally, De Steno had a decision to make. He began a market analysis of dental-specific technology companies and discovered very few were serving that industry.

Knowing the risk of not reenlisting, Dan chooses to pursue a career serving dental professionals by providing dental IT support and IT solutions. Since those early days, NOVA Computer Solutions has grown and serves Dental Offices, Chiropractors, Optometry Practices, and Medical Clinics.

Why Did Dan Target Only Dentists?

Early in Dan’s life, his father was a jeweler and became a Master Jeweler. The more he focused on making jewelry, he led to become a gemologist and stayed focused on that niche. That insight directed Dan to start an IT company targeting Oral Healthcare.

Dan truly believes oral health care affects the body, and he must help dentists and hygienists. De Steno liked being that IT mechanism that medical professionals could call. With his tools and resources, he was helping dentists change people’s lives, putting a smile back on their faces.

Since dentists must focus on their patients, they have no time to assess or educate themselves on what’s wrong with their IT system or the infrastructure and the problems it brings—targeting that specific vertical allowed Dan to understand all the technology areas for dentists.

What’s The Secret That Turns Customers Your Way?

From a marketing standpoint, Dan embraces video and client reviews. It’s trending, more industries have jumped in, and it is a very positive visual with prospective clients. With that said, the most significant driving factor is education, education, and more education.

Having that dental equipment education drives more dentists and dental practices to Dan’s company. When the customer sees and knows the IT person in front of them knows their devices more than they do, it opens the door for a conversation.

Dentists use devices and technology not found or used in other fields or industries. Also, their equipment is smart devices that easily connect to the dentistry’s network. Understanding how the equipment works are just as important as IT issues those devices encounter.

How Does NOVA Computer Solutions Market Themselves?

In 2017, Dan’s focus on growing his business took a positive turn. Before that, he wasn’t pursuing marketing to expand his business. As in life, there were family and health challenges, so the intent to scale the company remained on the back burner. But that would change.

De Steno began deep diving into marketing agencies that partnered with MSPs, mainly those that could promote his company to the dental industry. He did run into agencies that dropped the ball until he stumbled onto Ulistic.

Ulistic is an MSP marketing agency owned by Stuart Crawford, who was a successful MSP before creating his company. On January 1st, 2018, Ulistic became the marketing mastermind behind NOVA Computer Solutions’ marketing successes. What made the difference for Dan is that Ulistic knows the IT space inside and out and markets only for MSPs.

How Does Dan Spend Most Of His Time?

These days, with the company’s soaring growth, Dan focuses on running his business instead of working in the business. The days of knowing what each technician is doing, or the status of his client’s computers, are in the hands of capable NOVA Computer Solution leadership.

Dan believes your company will continue growing by concentrating on specific areas, especially with his current clients. He proactively ensures that each dental client is receiving tailored service. That has also allowed him to focus on the sales side of the business.

Since its inception, Dan states that NOVA Computer Solutions has been a lifestyle business. However, around 2010, life threw De Steno more curve balls. Instead of physically being in Northern Virginia, he transitioned to Jacksonville, Florida. From 2011 and 2016, he needed to split his time between both.

His biggest thank you goes out to his fantastic team. If it weren’t for them, Dan’s positive Nova Computer Solutions would not be where it is today if it wasn’t for them. He’s publicly stated, “I can’t say enough good things about our team and how close we are.”

Treating his team as a family had its ups and downs. Sometimes it hurts the bottom line, but by building a family culture around your team, you take the good with the bad. And that allowed Dan to split his time which proved to him you can still have an amazing team even though you’re not physically present.

That’s when De Steno realized a lifestyle business wasn’t what he wanted. He wanted to provide more for his team and higher quality service to his clients, so Dan had a renewed focus from that point forward. And by joining Ulistic and their high-performance club, he focuses more on sales and marketing. The rejuvenation has brought back the excitement and a renewed passion.

What Are The Challenges With Remote Technicians?

Dan and his team’s most significant challenges are keeping that personal communication flowing and the camaraderie they built. In the beginning, De Steno was a one-person shop trying to build a business. As the company grew, he looked forward to seeing the team in the office.

However, that dynamic changed during the pandemic, and face-to-face Teams and Zoom video meetings took over. Though they were not physically there, those teleconference calls showed Dan they could continue building relationships and adjust to the new culture.

The other challenge they’ve faced is having highly qualified technicians from different countries join their team. But, something happens, and that technician must resign. In one situation, they were in the last stages of hiring a promising technician. Without any warning, that person backed out at the last minute.

Why Did Dan Choose Servosity?

Dan’s testimony says it all, “After being referred by a close friend, we did our due diligence and chose to go with Servosity. Even though it increased our monthly backup costs, we’ve found that we are saving that expense 2 fold just from not having a technician working on backups.”

As a business owner, you have to stop and think if what you’re currently doing has not become an unnecessary expense. That’s what De Steno discovered. Before the switch, NOVA Computer Solutions had a technician solely focused on backups for 37+ hours a week.

Some might disagree, thinking they’re paying more with a vendor managing and testing backups. But when you factor in customer service, that investment freed Dan’s technician to help his dental clients when they call.

This Company Was A Game Changer For Dan

Along with partnering with Ulistic for marketing and Servosity for managing their backups and testing, NOVA Computer Solutions started searching for internal assistance. Dan wanted help in the back end for their agreements, billings, accounts payable, and accounts receivable.

After meeting with multiple representatives in 2018, De Steno discovered a company out of Louisiana called Virtual Partner Advantage (VPA). They specialize in the backend for MSPs and handle all of Nova Computer Solutions’ agreement billing, HR, AP/AR, invoicing, and everything.

You name it, VPS comes in, and they learn your business, and they take over a lot of that backend so that he can focus on sales and marketing. Dan’s technicians only need to do their work, put the time and entries into the ticket, and ensure the tickets are completed. De Steno’s dispatcher will go through and close the ticket out once it’s done.

Does Specializing Allow You To Charge More?

According to Dan, when you focus on a single niche, comparing your price with other MSPs who don’t specialize in an industry, there’s no way to gauge who’s charging more. If asked what brings in more clients, he believes it’s his expertise in the dental space without flinching.

Here’s the comparison. One MSP walks into the dentist’s office to try and sell their IT services. The representative informs the dentist that they can protect them from cyber threats, back up their systems, and provide 24/7 IT support.

When Dan walks through the door, he speaks the dentist’s language. For example, he notices the dentist has an intraoral camera. He asks them if they’ve perfected their knuckle to the buckle holding grip. That kind of education drives dental clients to NOVA Computer Solutions.

Final Thoughts – Get To Know Your Peers

For Dan De Steno, joining peer groups like the Dental Integrators Association has improved his insight when collaborating with other MSPs in his space. In some instances, Dan has called on an MSP in another State to be their boots on the ground. In return, his team returned the favor.

That opportunity to trade war stories, and discuss the latest technologies in the oral healthcare vertical, exposed him to new and fresh ideas. What the DIA group members learn and discover at the meetings, they can go back to their dental clients to discuss the new trends.

Dan De Steno says, “We’ve been able to build those relationships, and when we have an opportunity over in Dallas. I’m going to call him, and he will be able to help us with this project. And that has really helped us grow and experience our footprint.”

Google Rating
4.7
Based on 11 reviews