The American Dental Association (ADA) is the latest medical professional organization to be hit by a cyberattack, raising concerns about the security of sensitive patient information. The attack, carried out by a new ransomware group called “Black Basta,” encrypted ADA’s systems and disrupted various services. Although it is not yet clear how many dental offices were affected, the incident highlights the vulnerability of medical organizations to cyberattacks. In recent years, several hospitals and healthcare organizations have been targeted by hackers, resulting in the loss of confidential patient information.

The ADA is now working with law enforcement and cybersecurity experts to investigate the attack and determine how to protect member data. In the meantime, dental offices across the country are struggling to operate without access to critical ADA resources. The Black Basta group has not yet issued any demands, but it is clear that healthcare organizations face an uphill battle to protect themselves from cyber threats. 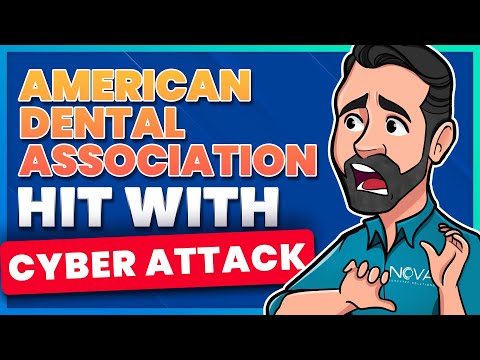 How Was The American Dental Association Impacted?

The online security community has been buzzing about a supposed data leak on the dark web involving ADA. According to the report by Bleeping Computer, a posting on Black Basta – an infamous hacking group known for mounting cyberattacks targeting large corporations – claimed to have leaked 2.8GB of ADA data, which the group asserted represents approximately 30% of the total data it stole during its recent attack on the company.

While there is no official confirmation regarding whether or not this purported data leak is legitimate, many experts are taking it seriously given Black Basta’s track record of targeting high-profile organizations with massive breaches. Indeed, given Black Basta’s reputation, it seems likely that if certainly part of ADA’s stolen data has been leaked onto the dark web, then the breach must be considered highly serious and potentially quite damaging.

Neither ADA nor any other authoritative sources have commented publicly on the matter. Nevertheless, all eyes will now be on ADA and its response to determine just how serious this incident truly is – and how best to protect customers from any future harm. In particular, as more information about this situation comes to light in the days ahead, we can expect to see the focus shift to ADA’s cybersecurity practices and what it can do to strengthen its security moving forward.

Cybersecurity In The Dental Industry – The Challenges Ahead

Regulators and industry experts have repeatedly highlighted the growing threat of cyberattacks targeting the dental industry. Yet, these groups seem unable to stop themselves from being targeted by hackers. In fact, following a similar incident in 2016 involving the data of 3 million dental professionals worldwide being leaked onto the dark web, ADA was among those targeted by so-called “data dump” sites offering specialized tools and services designed to help users easily access such stolen information.

This trend is particularly concerning given how valuable this data can be in certain contexts, such as identity fraud and the sale of prescription medications. As a result, ADA and other organizations like it must take the necessary steps to protect their customers and prevent being targeted by cybercriminals in the future.

Dental offices across the country are now impacted by this latest attack on ADA’s systems, highlighting the urgent need for all organizations in the industry to step up their cybersecurity efforts. While it is uncertain exactly how this incident may evolve moving forward, one thing is clear: if ADA does not take immediate action to improve its cyber defenses, it cannot expect to avoid future attacks and protect its customers in the process.

In the weeks ahead, expect to see more news related to this incident as ADA continues its investigation into what happened and how best to respond. Meanwhile, all others in the dental industry must take note of this event and follow suit by implementing more robust cybersecurity measures before they become a potential victim of an attack similar to that targeting ADA.

The American Dental Association (ADA) is a professional organization for dentists in the United States. It was founded in 1859 and has over 157,000 members.

According to reports, a group of hackers known as Black Basta claimed to have stolen 2.8GB of data from the ADA, which they have allegedly leaked onto the dark web. This would represent approximately 30% of the total data stolen during the recent attack on the company.

3. Is the data leak legitimate?

There is no official confirmation regarding whether or not the purported data leak is legitimate. However, given Black Basta’s track record and similar incidents in the past, the stolen data may have been leaked onto the dark web.

4. What type of data was stolen?

According to Black Basta, the stolen data includes information on ADA members, customers, and employees. This would include names, addresses, email addresses, phone numbers, and Social Security numbers.

5. What is the impact of this incident?

The potential impact of this incident is still unclear at this time. However, given the sensitive nature of the allegedly stolen data, it could potentially be used for identity theft or other fraudulent activities. As such, all those affected by this incident should be vigilant in monitoring their personal information and report any suspicious activity to the proper authorities.

6. What is the ADA doing in response to this incident?

ADA has released a statement acknowledging the incident and saying that they are working with law enforcement to investigate it. They have also advised all those affected by the incident to be vigilant in monitoring their personal information and report any suspicious activity to the proper authorities.